It's April. Lacrosse season gets more fun this time of year. THE FACEOFF is here to get you ready for good times.

Rejoice, lacrosse fans! After this weekend, basketball's reign of terror on the college sports world is extinguished and lacrosse gets top-dog treatment for the rest of the spring (unless you're in the New Haven area and the Frozen Four has exercised eminent domain over your brain). This week is filled to the brim with rivalries, a stew so hot that it'll probably spill, burn you, and then cause you to sue us in stupid courts of jurisprudence, earning a large court-awarded sum of money due to pain and suffering (stupid courts of jurisprudence).

You can tell the tide is turning on the season -- the games mean more; conference rivalries hold huge implications, while continuing out-of-conference games are crucial for teams on the NCAA Tournament bubble. This weekend features some solid traditional rivalries down in New Jersey and Virginia, as well as some games taking place in Baltimore and Denver that mean more this season than compared to prior years. We also have some statistics straight out of the NCAA oven, as well as a chart that shows how much movement has been going on in the polls this season.

Here's a look at this week's version of THE FACEOFF: 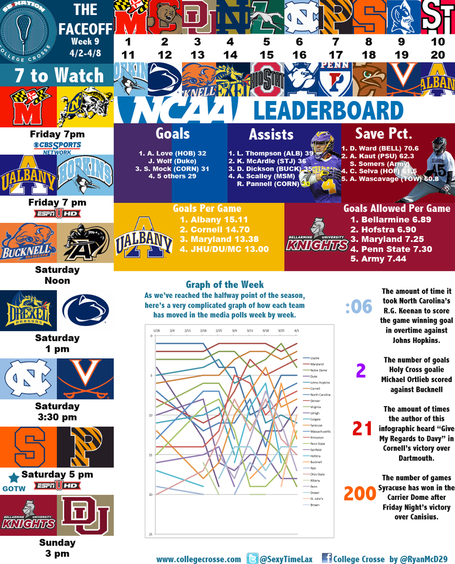 As usual, stick with College Crosse for all the latest lacrosse analysis, news, and discussion. In the meantime, we're tracking down every Michigan and Syracuse fan to force them to watch lacrosse before basketball this Saturday. Just a little duty that goes with the job.