Well, the one week of the spring we slip in some basketball watching instead of incessantly focusing on lacrosse, all hell breaks loose. Top five teams losing, ranked teams losing to unranked teams, Bryant beating Stony Brook, Peter Baum winning a crabcake eating competition while also playing in a sanctioned Division I larosse game . . . if you name it, it probably happened. And as a result of Cornell losing to Bucknell last Tuesday, followed by Maryland dropping a game to UNC:

So, a viral video from my senior year of high school aside, things went cray-cray in college lacrosse. And that's why, more than ever, you need THE FACEOFF to guide you through your lacrosse week. What do we have in store?

So without further ado, here's THE FACEOFF. 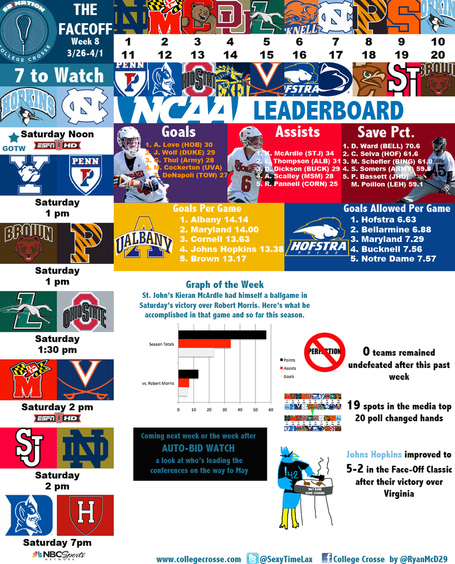 Considering there's less March Madness happening this week, you should become best friends with lacrosse again. Join us here at College Crosse to talk all about the games and stuff. Also, I'll be live tweeting Syracuse-Canisius on Friday night and, should my friend not decide to go home this weekend last minute, Dartmouth-Cornell on Saturday, so be on the lookout for updates on those games. And as always, let's embark on another week of lacrosse fun times with the guiding hand of THE FACEOFF.