The lacrosse season keeps on keepin' on, even with that bouncyhoops thing going on. Here's an infograph in case you need something to sustain you until that other sport kicks off its tournament thing.

It's the middle of March. The good news is lacrosse season is in full swing. The bad news? The NCAA basketball tournament is, too. And that means your lacrosse viewing time is probably going to be taking a hit this weekend. Don't fret, though: The sport is still here for you -- comforting with a warm embrace -- featuring some excellent games if you're all basketball'd out. There are even some solid matchups happening before the Big Dance begins in earnest this week in case you need some finger food before the main lacrosse course.

THE FACEOFF this week illustrates a lot of movement in both the polls, big swings in the leaderboards (just take a gander at that beautiful Hobart purple making an appearance), as well as some of the games to watch this week. There are a lot of must-see tilts outside of the usual ACC/Ivy/Big East group (though there are some goodies in those, too) that we've featured, as well as some television and Internet broadcasts worth a watch. Notre Dame-Ohio State is sneakily HAM-ish and may be the most interesting bar brawl of the weekend, although the Penn-Cornell game in the Land of Gorges this Saturday is a very close second. So, if you're not in the mood to watch shootyhoops, there's meat for your tummy, carnivore.

Oh, and the Faceoff Classic is this weekend instead of during the cold weather stretches of late February, so there's that as well. Let's take a look at our lovely infograph, shall we? 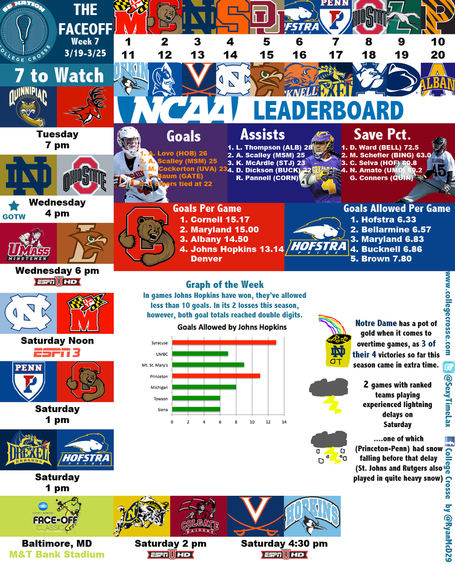 As always, stay here at College Crosse for all your lacrosse discussions and good reads and stuff. That's something the basketball folks can't give you this weekend. But we won't get mad at you if you cheat on lacrosse for basketball just for one measly weekend. That's because we're still best buddies, and that's all that matters in the long run.