Get ready for the upcoming week in lacrosse with an infograph, complete with snowman drawings and stuff.

It's Week Three of the NCAA lacrosse season and things are really start to get going as the majority of the cohort's 63 teams are now playing games. After some exciting stuff the past two weeks, the media poll has changed around somewhat considerably. Teams are looking to identify themselves in the coming weeks as contenders, while others are trying to figure out what's going on. Oh, and there's a #1 vs. #2 matchup up ahead this weekend.

In this edition of THE FACEOFF, you'll notice an updated top 20, and that means more colors being used thanks to Albany's entrance into the fray (hooray purple and yellow!). Furthermore, the "7 to Watch" segment becomes harder to choose now that there's more top 20 matchups and others where teams will try to break out of early slumps. Don't worry, that grey space will be soon be brimming with bon mots as the NCAA will be putting up their stats and leaderboards relatively soon.

Let's look at what's there to see this upcoming week. 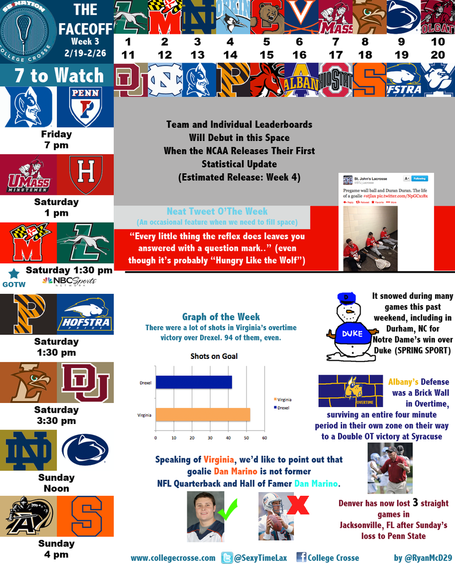 Just a bit of housekeeping to take care of: next week's edition of THE FACEOFF will be coming out on Wednesday, so don't panic if you're worried there's no explosion of colors and stats on your Internet browsing system on Tuesday. Otherwise, stop by here at College Crosse all week long to chat about this week's big matchups and to get your news from across the NCAA.