Inside Lacrosse Shelves the Big City Classic, Independence Classic in 2014

The magazine and lacrosse event coordinator is only hosting one event this season: The Face Off Classic.

Share All sharing options for: Inside Lacrosse Shelves the Big City Classic, Independence Classic in 2014

Welp (via here and here): 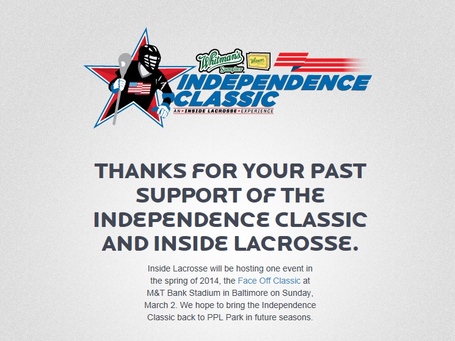 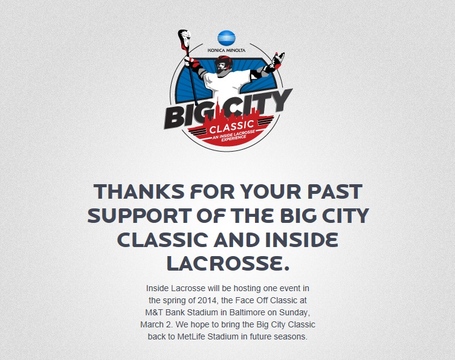 This is a somewhat surprising development for the 2014 season. The 2013 Independence Classic was the first iteration of the event and failed to attract much of a gate at PPL Park (around 5,200 fans passed through the gates according to this box score). The loss of the event from the schedule this year is only interesting in the fact that the concept of "Classic" now requires only that a thing happened at least once. The Big City Classic, though, was quickly becoming the marquee event of the regular season, regularly drawing decent crowds (around 20,000 fans passed through the gates last year according to this box score) and featuring landscaping-defining games. The non-existence of the event this coming spring is going to leave a void on the national agenda, creating an open date on the late-spring calendars of Northeast fans .

The big question, of course, is what Inside Lacrosse's decision to host only the Face Off Classic means for overall big event attendance in 2014. Much has been made of the decreasing attendance numbers at NCAA Tournament games, especially over Championship Weekend. The presence and prevalence of these regular season mega events were indicated by some as a reason for declining butts-in-seats in May. Will the absence of the Big City Classic and Independence Classic push fans in the Northeast toward a mandatory Baltimore visit over Memorial Day Weekend, wrapping themselves in fantastic days of lacrosse in late-May now that their local options are limited to watching regional teams during non-layered game days? That will be an interesting issue to follow.

Also -- for fans that are hardcore traditionalists and like big games limited to campus locations: This news has to be a happy course correction.