The Pioneers have some new friends in the sandbox this year.

PROGRAM SCHEDULE PROPAGANDA: PRESS RELEASE
THIS IS WHY WE FIGHT: THE SCHEDULE

It's kind of a shame that the ECAC couldn't hold it together for 2014. A league featuring Loyola, Denver, Ohio State, Air Force, and Fairfield would likely rank as one of the better leagues in the nation, creating an eye-opening race for the conference title. Unfortunately, with the departures of Denver to the Big East and Loyola to the Patriot League, that situation will never come to fruition. It's going to be a different kind of reality for the Pioneers in the coming spring due to this state of affairs, and the residue of that is the potential of the unknown.

Here are some schedule highlights and games of note: 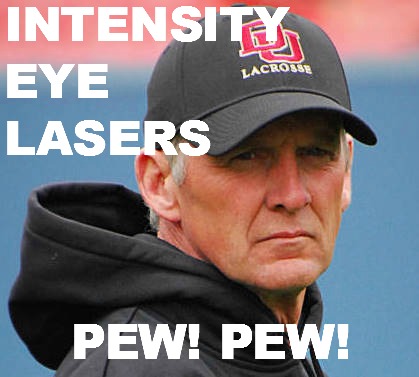 Denver has a history of putting together death marches. What's more important about that fact is that the Pioneers have also come out of those brutal stretches of games in a solid position. For 2014, the Pios didn't deviate from their modus operandi, assembling a stretch over two weeks that features four consecutive teams ranked in the top 13 of College Crosse's fall top 20 (Pennsylvania -- 13th; Notre Dame -- fifth; Penn State -- ninth; Ohio State -- 10th). The first three games in that stretch features defenses that should challenge a Denver offense that will be undergoing a bit of an offensive transition due to graduations and a notable transfer; the final date in that two-week period gave Denver fits in 2013. None of this is easy; the compacted period in which the Pioneers will face these high-profile opponents only exacerbates the difficulty of emerging with success. There's no relief here, and Denver's foray into this four-game adventure comes with only a modicum of preparation: Immediately preceding those March games are dates against Marist and Canisius, not exactly bridge material to some of the nation's best teams.

Looking at Division I lacrosse from a high level, it appears as if the Big East is one of the few leagues that, at the moment, has a clear front-runner for the conference championship. In just about every other league, you can make a strong case for two or three teams to absolutely contend for the league championship; the Big East, contrastingly, looks like it's going to be Denver's playground with the rest of the conference's membership jockeying for position behind the Pioneers. This isn't to say that there isn't potential in the Big East for a team to step forward and legitimately challenge Denver for the league's crown (St. John's and Villanova are interesting actors in this scenario); rather, it's that the Pioneers seem -- right now -- significantly more developed than its peers in the Big East. This is exactly why the Pios could, for all intents and purposes, have the one-seed in the Big East Tournament wrapped up in early April: Denver's defining stretch in conference play is the consecutive games against Georgetown, Villanova, and St. John's; if the Pioneers come through that with at least two wins, there's no reason that Denver should finish Big East play with more than one loss, forcing every other opponent to play catch up in competitively-balanced wars with difficult to foresee outcomes. In other words, if the Pioneers take care of business where they should, the middle of the league could fight in the crab bucket, allowing Denver to waltz away without serious harm.