Stop me if you've heard this story before.

Share All sharing options for: Nicky Galasso to Miss 2013 Season with Foot Injury

What are the odds that John Desko is wrapping his non-injured attackmen in bubble wrap right now, hiding them in the supply closet until Syracuse opens its season against Albany in two weeks?

As reported first by Terry Foy at Inside Lacrosse, and later confirmed by the school in a press release, Nicky Galasso -- the biggest transfer story of the offseason, leaving North Carolina for the Orange -- will miss the entirety of the 2013 season due to a foot injury that will require surgery:

A Syracuse spokesman confirmed to Inside Lacrosse Tuesday afternoon that Nicky Galasso suffered a lower body injury in practice last week that will require surgery, and he is out for the 2013 season.

As the Syracuse Post-Standard reported Saturday, recent Syracuse transfer Nicky Galasso was held out of the Orange's scrimmages vs. Hofstra and Holy Cross with an undisclosed lower leg injury.

While details are still emerging and coach John Desko may address Galasso's injury in a press conference at 3:30 p.m. Tuesday, multiple sources told Inside Lacrosse that Galasso has broken a bone in the opposite foot that hampered him for much of last season with North Carolina, an injury around which the circumstances contributed to his decision to transfer from Chapel Hill.

Do you think that John Greeley and Nicky Galasso share medical insurance information? If these guys ever played on the same team, they'd need to call their squad Team Cyborg. Also, I'm a doctor of laws and not a doctor of medicine, but methinks that Galasso may need to drink more milk. Two broken feet in consecutive years doesn't sound like the greatest physical situation to be in.

The loss of Galasso leaves the Orange in a tough position at attack with the season looming on the horizon. With Johns Hopkins transfer Mike Daniello out of the mix this upcoming season -- he's recovering from a skull fracture from an undisclosed incident -- Syracuse will enter 2013 with only one proven asset at attack: Finisher Derek Maltz. Desko utilized a full complement of attackman on Saturday in the Orange's scrimmages against Hofstra and Holy Cross, giving Billy Ward, Kevin Rice, Eric DeJohn, and Air Force transfer Dylan Donahue notable minutes in-close. The Syracuse offense also optimized JoJo Marasco in an inverted midfield posture for much of the Hofstra game, but the underlying issue still remains: With uncertainty at a major focal point for the Orange's offensive efforts -- and concerns still existing about the capacity of Syracuse's midfield -- the loss of Galasso and the relative vacuum at attack at the moment yields further questions about how the Orange are going to go about their business this spring.

It's a brutal situation for Galasso -- almost unfair, even -- and it leaves Syracuse looking for more answers where it thought it had at least one.

UPDATE: Andy Pregler, lacrosse beat writer for SB Nation site Troy Nunes is an Absolute Magician, confirms that Galasso is in a boot and on crutches: 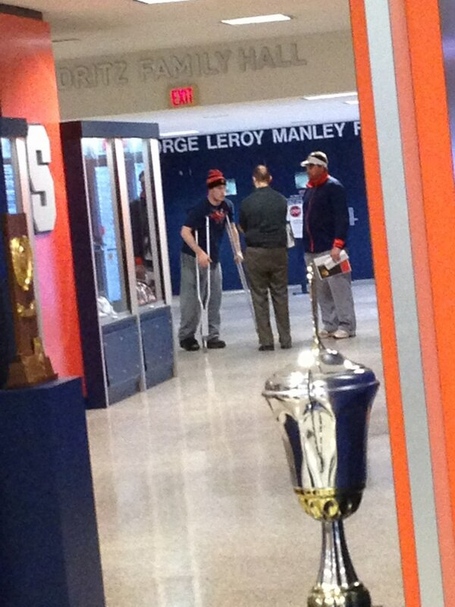