Four teams enter with three on the bubble. THE FACEOFF prepares you for what should be an epic weekend above Cayuga's waters.

Every Division I tournament. Every team. College Crosse has it all on lockdown. Please send cookies and naptime. Today we're slashing to bits the Ivy League Tournament.

(To set the mood, I highly recommend blasting out Billy Talent's "Hanging By a Thread." It aptly sums up this tournament.)

This weekend in Ithaca, there's one certainty with the Ivy League postseason: Cornell's in the NCAA Tournament no matter what happens. As for the other three participants? They're sitting on the bubble quite uncomfortably and need to accomplish some big things.

Yale, Penn, and Princeton will fight for their postseason lives at Schoellkopf Field starting today. The first semifinal, Yale-Penn, might end up being a play-in game for the NCAA Tournament with their similar resumes and RPI numbers. Princeton needs to avenge their loss against the Big Red from just six days ago at the Meadowlands to have a fighting shot at an at-large, but realistically need to win the Ivy title to get into The Big Barbecue. And yeah, Cornell's got a ton of firepower on offense and wants to do nothing more than win the conference on their home turf and dash the hopes of opposing teams. In conclusion, you may need to change your pants with these four teams playing today and Sunday.

ESPN3.com has the games this evening while ESPNU will have the championship on Sunday morning. I'll be making the trip to Ithaca on Sunday to live tweet/update/write up/endure "Give My Regards to Davy" (should Cornell win today), so be sure to follow me on Twitter -- @RyanMcD29 -- and be on the lookout for things here. As for the graphical side of things, here's THE FACEOFF with an outlook and some history lessons to boot. 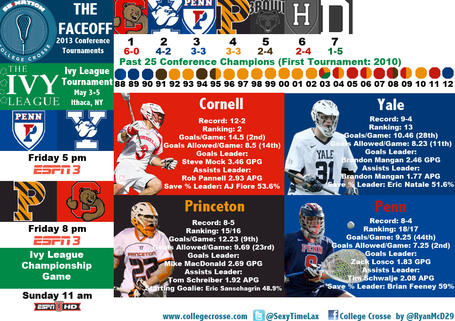 (Click to make it larger than an Ivy League degree's value.)