Share All sharing options for: THE FACEOFF: 2013 CAA Tournament Infographic

Every Division I tournament. Every team. College Crosse has it all on lockdown. Please send cookies and naptime. Today we're slashing to bits the THUNDERDOME! Tournament.

This is the tournament teams currently on the wrong side of the NCAA Tournament bubble will be paying close attention to. Penn State should be a lock to get into the NCAA Tournament, while Drexel is fighting it out for an at-large invitation. Should Penn State win the CAA Tournament on their home turf, then they're in; Drexel, with a loss, will have to sweat it out. But that's too simple, and this is the THUNDERDOME! we're talking about: The CAA is infamous for crazy conference tournament upsets, and it's very possible that Massachusetts or Towson could have a say in screwing up everybody's NCAA Tournament projections.

The action gets underway this afternoon in University Park, Pennsylvania (not to be confused with its famous twin, State College, Pennsylvania). All the action will be televised on the magic of the Internet, as CAASports.com will have the stream for you, as well as your local Comcast SportsNet affiliate's website if you're near one of the teams playing. Here's how THE FACEOFF presents the history and the statistics of this year's THUNDERDOME! Tournament: 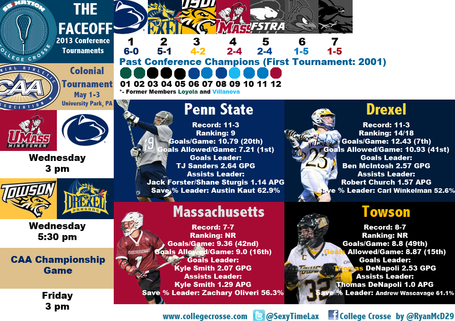