The Best College Lacrosse Team in the History of History Tournament: Bracket

Share All sharing options for: The Best College Lacrosse Team in the History of History Tournament: Bracket

Alright, knuckleheads. It's just about time to make this all happen. This is very exciting.

In case you missed it last week, College Crosse is going to be running, over the course of this week, a tournament to find out which college lacrosse team -- during the NCAA Tournament era -- was the best that ever did things while wearing jerseys and holding implements of impalement. As I wrote:

It's going to be a 16-team showdown, seeded throughout and you'll be able to vote on the winners of individual matchups. Again, we're limiting this to the NCAA Tournament era, so it's just teams from 1971-2012. Sorry, Hopkins teams that smacked around fools from the early 20th century; you're not eligible (or remotely close to living). At the end we'll crown a champion and nothing substantive will happen. It's kind of like simulated war games but different in that we're not simulating the loss of life, there's no evasive maneuvers, and this exercise involves lacrosse teams that will never play each other because this is totally imaginary. So, yeah; that's a perfect analogy.

Without any serious objections from anyone, we're going to use those 16 teams that I floated in the piece. While picking the 16 teams to comprise the tournament was a pain in the ass, seeding this thing was even more difficult. Rather than putting on my dictator hat and shoving a bracket down your throats, I've taken a first stab at seeding the tournament; you can use the comments below to make suggestions or post funny pictures of panda bears or something. It's up to you.

This is how things look right now: 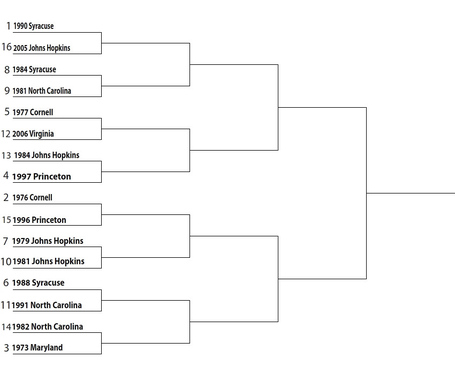 I'll make a nicer bracket once we settle on the seedings. Some notes: