In a sport that is growing rapidly, one of the top programs in the country felt they had to do something to stay in the recruiting game.  So the Blue Jays of Johns Hopkins University released plans to build a $10 million lacrosse facility for both their men's and women's program.

When schools like Ohio St., Michigan and Penn State entered the sport, it meant that a player can now play Division I lacrosse at a school sponsored by companies like Nike and Adidas.  Schools like Syracuse and Maryland, as well as Notre Dame have indoor facilities and state of the art weight rooms, and when a star high school player has the choice between these schools and a Johns Hopkins, there are many deciding factors that would make a player choose these big schools.

Now that isnt a knock against Hopkins.  They have graduted some of the best players of all time, won numerous championships and have one of the best coahces in the country. But when you have a chance to play in front of thousands of people in the Carrier Dome or Ohio Stadium, that would be my choice.

"Homewood Field is the Yankee Stadium of the lacrosse world," Daniels said at the news conference 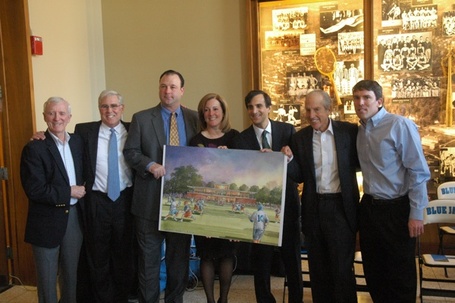 The Cordish Lacrosse Center, named in honor of lead donor David Cordish, a 1960 Johns Hopkins graduate and a three-year member of the Blue Jay lacrosse team, will include locker rooms for both the men's and women's lacrosse teams, office space overlooking Homewood Field for the men's and women's coaching staffs, a 50-person theatre, a conference room, an academic center and a training room.

In a time of age where schools are putting more money towards lacrosse and more schools have lacrosse programs, Hopkins took a giant step forward in showing the lacrosse world the powerhouse they want to be and they are used to being.  Lets see how this works out in the future for recruiting.  I doubt it will hurt.