John Carrozza: A Shot Clock Must be Added at the NCAA Level

Share All sharing options for: John Carrozza: A Shot Clock Must be Added at the NCAA Level

As I mentioned Tuesday, College Crosse is proud to welcome John Carrozza to the blogosphere. In his first piece, the former Syracuse Orange midfielder talked about ways to make the college game grow and he believes adding a shot clock is a good way to start.

College lacrosse has taken many steps forward to become a sport that is commonplace throughout the U.S., but more importantly, worldwide. The 2010 World Championships were instrumental in exposing this great sport to audiences from all over the world. Players like Paul Rabil, Mike Levielle and Max Seibald, just to name a few, have been able to transcend their style of play from the college ranks to the professional ranks.

College lacrosse allows for coaches to try different strategies in order to optimize the talent within their respective team. Johns Hopkins uses a tactical style of play that slows down the pace of the game and emphasizes the importance of possessions on offense. Having played against the Blue Jays on several occasions, I have seen the upsides of this style as well as the downside.

On the other side of the spectrum, Syracuse and Virginia use a run and gun style of play that I personally think brings out the best in players. The idea is to allow your athletes to use their athleticism to make plays based on what’s happening around them. Whether it’s moving the ball based on where a slide is coming from or running a fast break correctly; There is no thought process to slow down decision making, plays just happen.

The players I mentioned above have been able to separate themselves from a large pool of talented lacrosse players due to their ability to "just play," an attribute that they have worked very hard for and they’re productivity on the field speaks for itself. Many speculate about the current structure of the college game, more specifically, the lack of excitement due to style of play. I for one, believe that the addition of a shot clock at the college level will not only make the game more exciting, but will prepare those who aspire to continue their playing days in the MLL or NLL. Both professional leagues possess a shot clock and current players in those leagues can back me when I say a shot clock makes a difference on a number of levels.

With a shot clock, midfielders will have to be able to play both ends of the field, a talent that only a select number of players possess. From what I’ve experienced at the college level, not many midfielders can play offense and 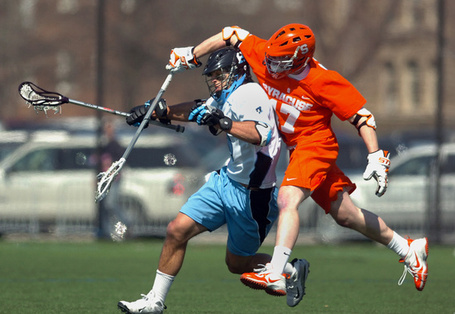 Which brings me back to my previous statement that players have to be able to "just play." Lacrosse needs to take the template of football and basketball when deciding on which rules will level the playing field. As college football and basketball players continue on their athletic journey into the pro’s, they are equipped with the tools to be ready for the next phase. As for lacrosse, there needs to be a shot clock on the college level if we want the next generation of great pro’s to be ready for the demands of the MLL and NLL.