The Virginia football team finished 4-8 this season and has compiled a 7-17 record over the last two years. I think we can all agree that the singular reason the team has struggled so mightily is...

At least, that's what you'd think after two of the team's players, wide receiver Kevin Royal and tight end Jeremiah Mathis, took to Twitter to voice their displeasure over the people charged with equipping them well when losing to Duke.

It was at this point that their gripe caught the attention of Virginia lacrosse player Austin Geisler, who struck a blow for all of Virginia's Olympic sport and non-football athletes who play for teams with winning records... 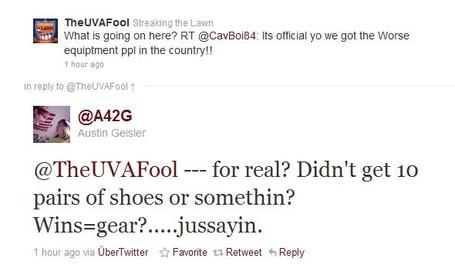 The best part of the Twitter-saga is that an actual member of the Virginia equipment staff caught the tweets as well and decided to let the football team in on a little not-so-secret about the locker room they seemed to be having problems with.

1. Football players attempt to use locker rooms while they're closed for cleaning.

All is right again in the world.

Update: The players have since apologized for the outburst. All is well...