The most bonkers group of them all is next up in THE FACEOFF's conference tournament infographics.

Share All sharing options for: THE FACEOFF: 2014 ACC Lacrosse Tournament

Back when it was announced Notre Dame was joining the ACC in non-football sports, complementing the league's prior addition of Syracuse, the lacrosse world was abuzz with the conference's potential on the lacrosse field. Pundits were foaming at the mouth about how this was going to be the best conference ever. SEC football couldn't hold a candle to what people thought ACC lacrosse was bringing to the table.

Although it may be dependent on how its five or six teams do in the NCAA Tournament, the ACC has lived up to the hype in the regular season. All six teams have been in the top 10 for the majority of the season, with no team falling any further than 11th in the polls. The ACC crew also managed to go a whopping 41-5 in non-conference games to this point. The difficulty of the conference came to fruition as well, with only two teams finishing ACC play with a record above .500.

Enter the 2014 ACC Tournament. For most of the teams in the conference, this is basically an RPI booster. Heck, the ACC added a game between the fifth- and sixth-place teams for that very purpose. Even Virginia, who only mustered up one conference win early in the season, is (likely) bound for the NCAA Tournament. However, given the quality of the teams, the focus shouldn't go by the wayside even though they're all feeling cozy about their Big Barbeque invites. The intrigue of the tournament lies in Notre Dame. Although in the polls Notre Dame is snugly in the top 10, the various metrics that go into determining the NCAA field are not as kind to the Irish. As of now, many bracket projections put them either as the first team in or the first team out. A loss in the semifinals to Maryland plus a loss next week to Army automatically disqualifies the Irish, as they'd fall to under .500 on the year. A win, on the other hand, could secure them into the tournament (subject to what happens in other conference playoffs).

With all that said, you're not really here for another preview with lots of words repeating the same stuff we've been saying for a while. You're here for the infographic! Here's a look at THE FACEOFF for the 2014 ACC Tournament: 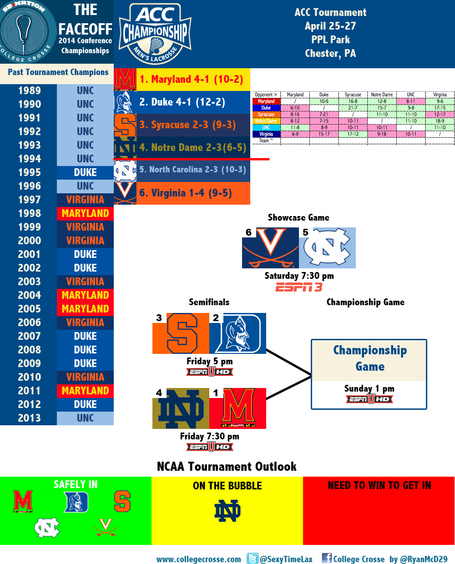