It's not the oldest rivalry on the books, but the Pioneers and Greyhounds have emerged as an important battle on the national scene. Here's nice picture for the matchup.

Lacrosse is often unfairly stereotyped as a country club sport. So let's roll with that comparison for a second. Johns Hopkins-Maryland, Duke-Virginia, Princeton-Syracuse . . . those are the old-money rivalries. They made all their wealth in the stock market or oil or steel or something. Then the new guys come in, hot off their fortunes in social media and the Internet. This is Denver-Loyola: The Pioneers really emerged on the national scene when Bill Tierney got out of his trusted hedge fund at Princeton and invested in some start-up video sharing website in Denver; meanwhile, Loyola's the hot shot founder of a political blog that boomed during the 2012 election and got bought by a major media conglomerate for a couple hundred million.

Enough with the comparisons and let's get serious. The two squads have only been facing each other for three years in ECAC play, but the Greyhounds and Pioneers have emerged as the premier rivalry in the conference. Last season these two teams truly kicked this game into a true rivalry, with the two programs butting heads three times over the course of 2012. After a bunch of close games -- the second of the three in the ECAC Tournament arguably earning "Game of the Year" status -- Loyola emerged as the victors on their way to the National Championship. This season, both teams are in the top five and are looking for a huge victory to get them to the next level with a month to go in the regular season. And with a host of explosive players on both sides, this should be quite the exciting game to watch. Here's how they square up. 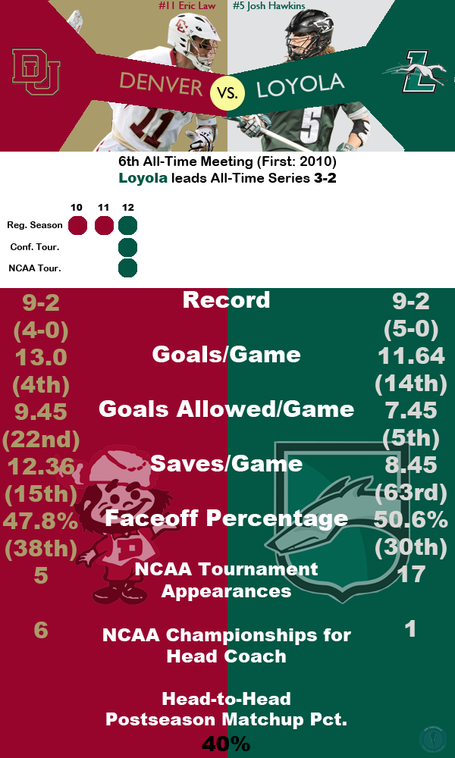