AY-SEE-SEE this cool picture to get you prepared for tonight's showdown between the Cavs and the Devils.

Duke-Virginia is always one of the biggest highlights of the season in the ACC. In a normal year, both teams are at the top of the polls and the game plays a huge role in determining where each team is seeded in the NCAA Tournament. 2013, however, has been anything but normal. Duke arguably started its season colder than it usually starts the year, but has since recovered nicely and put themselves back into the top 10. Virginia? Well, for the first time in nine years, the 'Hoos are outside the top 20 and are in must-win mode for the duration of the season. That means that this game means even more than it usually does.

The good news for Virginia is that a win against Duke would more than likely get them back on toward the bubble. The bad? In the John Danowski era at Duke, Virginia has only won one game against the Blue Devils. It'll be a battle in Durham, as Duke looks to stay within the top 10 with all this going on and Virginia makes its charge. The game will be on your viewing screens if you tune into ESPNU tonight. Here's a look at how these ACC rivals match up heading into the game. 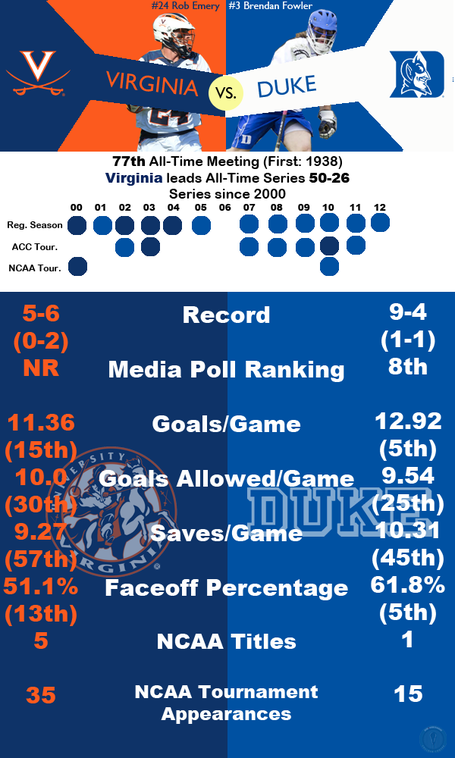