College lacrosse's most historic rivalry gets the visual treatment heading into their big game on Saturday.

Every sport has a rivalry that goes all the way back to the beginning. Yankees-Red Sox, Michigan-Ohio State football, Bears-Packers, Canadiens-Maple Leafs . . . these are the rivalries that define a sport and span generations. For college lacrosse, it's Johns Hopkins-Maryland. The two schools from the Old Line State have been going at it since the second Grover Cleveland administration (what?!) and each time it's been a fierce battle. So many of the greats in college lacrosse have worn Columbia blue and black or red (or BLACK OPS) and took part in this storied rivalry that their individual legacies are also defined by their play in this game.

The 110th edition of Terps-Jays will take place this Saturday on ESPNU. Two stories have emerged for this one: For the Terps, they're looking not only to notch a third straight victory over Hopkins, but are also looking to solidify their spot at the top of the polls with a little under a month to go in the season; Johns Hopkins, on the other hand, needs a quality victory to try and continue their streak of making every NCAA Tournament since 1972. A loss for the Jays could put them at the point of no return, with only Loyola left to significantly boost their resume. With that in mind, both teams have a lot to play for, making this rivalry game crucial to how the national lacrosse scene will look for the upcoming week and, perhaps, the entire month of May.

Here's how the two teams look heading into the game. 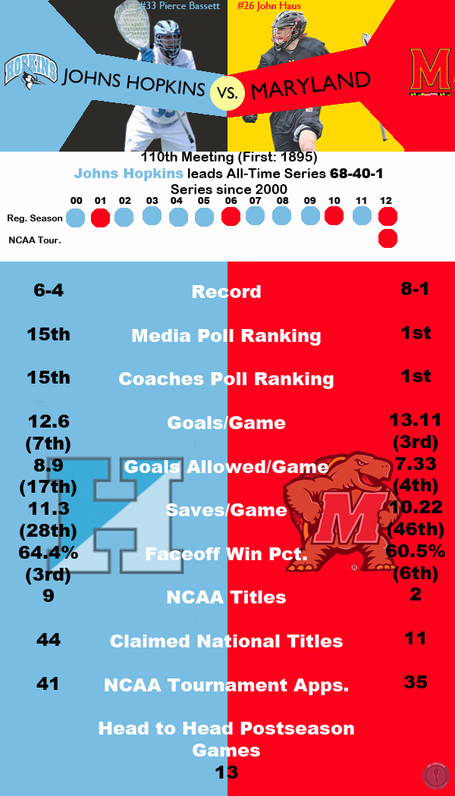 (You obviously want more, so click the image to make it have more size.)