The Battle of Central New York -- now in picture form!

Central New York supremacy is on the line at the Carrier Dome tonight as the Cornell Big Red take on the Syracuse Orange. The two color-themed teams have a storied rivalry and are just about an hour apart, making it one of the best regional showdowns in the country. When these two teams face off, the sparks usually fly. The hits seem harder, the saves seem more spectacular, and the goals have more importance. Both teams feature an array of stars, especially in recent seasons -- from Seibald to Pannell for the boys from Ithaca to the Powells to Marasco for the Orange, some of lacrosse's brightest stars take the field when these two hook up.

And, of course, some of the most thrilling moments in the sport happen when you're talking Cornell-Syracuse. Probably my favorite game that I ever attended was their 2010 showdown when the Orange scored a buzzer beater in the fourth quarter to take down the Red at Schoellkopf. That game happened to be the rematch of probably the most insane national championship game played in an NCAA-sanctioned event since North Carolina State took down Houston in the basketball national championship. Look away, Cornell faithful; turn up the volume, Syracuse die-hards.

So, now that we've set the narrative, here's a look at how these two national title contenders compare for their showdown tonight. For once, if you don't live in Central New York, you can catch the game on national television as ESPNU has the action starting at 6 pm. 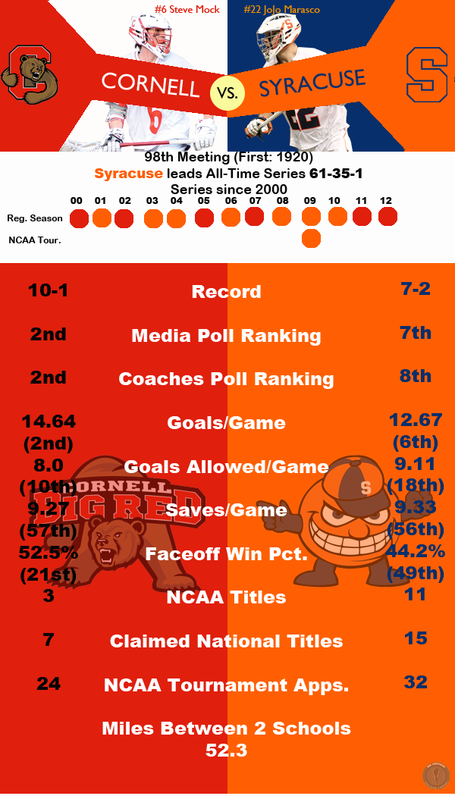