Who does your state hate the most? We tell you with this nice map.

Share All sharing options for: Breaking Down the NCAA Lacrosse Hate Map

The latest craze in the sports twitterverse and blogosphere is hate maps. The idea is simple: you take an informal poll asking people which team they hate the most, track their location, create a nifty map in Photoshop, then post it. Eventually the Internet will take it, run with it, and treat it like the gospel. You may have no idea how the Philadelphia Eagles are the most hated team in Nebraska, or how the Boston Bruins are the most hated team in Florida, BUT THE FACTS DON'T LIE, SON! There's also those Facebook-like maps that come out with sweeping generalizations like "Nobody likes the Jets, Raiders, A's, or Mets," but those are silly because hey, at least the Jets sorta run Nassau County in real life (small victories are almost like actual victories).

Recently we have undertaken top research efforts -- top! -- to find out which states hate which teams the most in college lacrosse. Okay, it's more like we took some liberties and did this undemocratically. Here's what we found: 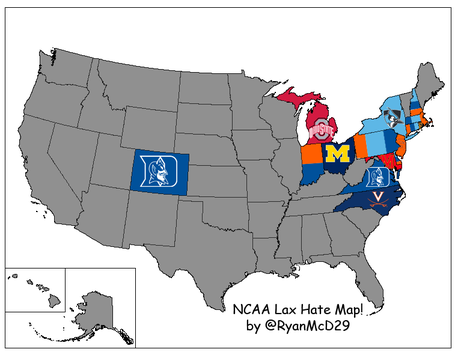 States in Grey: We were unable to gather enough results for our poll for states that were in grey. We can assure you, though, that Alaska has a dislike for Lehigh. We can hear the complaints coming out of Bellarmine, Furman, Mercer, and Jacksonville already, but maybe next time you should've responded in time to our 24-hour public poll that was never actually made public.

Indiana: Indiana, however, skipped the Johns Hopkins part and zeroed-in on the two ACC rivals for Notre Dame: Duke and Syracuse. Two national title games and multiple Big East championships lost against the Orange and Devils probably riled up Irish fans a bit too much.

North Carolina: Sure, Duke fans saying UNC and vice-versa was common, but they seemed to unite on the fact that Virginia's one of their biggest rivals.

Virginia: No doink, a bunch of 'Hoos fans can't stand the fact that Duke beats them every year, no matter how the two teams look on paper. Not to mention that the Blue Devils are the only thing standing in the way of Virginia's success this decade and oh God no don't look at what happened in 2013.

Maryland: You may ask yourself, "Why the hell isn't this Virginia?" Well, you see, a bunch of Johns Hopkins fans found out about this poll and spammed it, so in a wacky turn of events and a viral ad campaign that caught the attention of The Baltimore Sun, Maryland is Maryland's most hated team.

New York: There's not much that Central New Yorkers and Long Islanders agree on as lacrosse hotbeds. The only unifying factor is their hate for the Baltimore lacrosse hotbed. Add in a bunch of angry Syracuse.com commenters and you've got a recipe for a pretty easy victory for Johns Hopkins becoming the most hated in that state.

New Jersey: Princeton fans had a bit of a hard time deciding between Cornell and Syracuse as their most hated team. Thankfully for this poll, the legion of Rutgers fans made life much easier, as they pushed Syracuse well past the Red to win New Jersey's most hated lacrosse team.

Rhode Island: I guess Brown doesn't like Princeton too much or something. Mild upset over Harvard and Yale.

Colorado: An island of lacrosse fanhood in a sea of vast lacrosse indifference, marked in grey, Denver fans helped propel Duke to the status of Colorado's most hated team. Notre Dame finished in a close second, while Army and Navy got a little push from some Air Force fans.

So go ahead, Internet. Start a flame war with all this info we've got here. We've got the fire extinguishers at the ready to clear it out for you when you're finished.