Things are getting difficult for college lacrosse's embodiment of bloodlust.

Share All sharing options for: Tracking Rambo Kill Counts: It Wasn't My War!

Those pursuing and attempting to neutralize M. Rambo have become more competent. After locking up nine kills in his first two tours, M. Rambo has put six bodies into the ground in his last three fits of fury. There is still much blood on M. Rambo's hands . . . 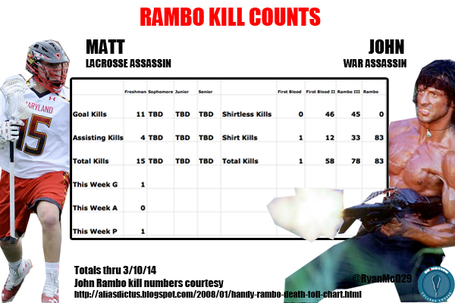 . . . but his rate of annihilating those that feel his violence has slowed. This is not necessarily problematic for M. Rambo -- he is, after all, in a new jungle, ripe with potential areas of disaster that he has not encountered in the past -- but it is a reflection of increased difficulty against stronger opposing forces.

M. Rambo -- not unlike J. Rambo -- remains an important tool of destruction. His contributions to Maryland's death machine are notable, and he is a major factor in the Terrapins ability to gut guerrilla forces. The volume of kills -- and the responsibility to bag those kills -- that he's assumed is in-line with the notable mercenaries that he's aligned with this year:

M. Rambo is more than just a lone vigilante, and those that he is running with need him to slay those in opposition as much as M. Rambo needs his fellow fighters to help clear a path.