Which college players put together strong performances out in Colorado?

Share All sharing options for: College Stars Shine at the Vail Lacrosse Shootout

While you and I were busy doing things like this . . . 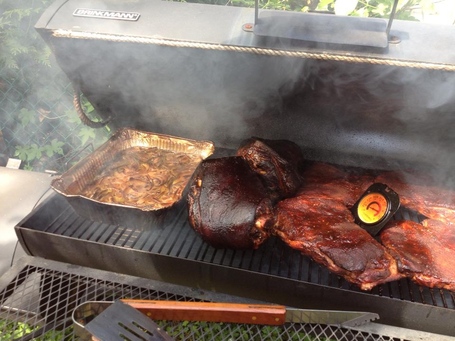 This was from my Fourth of July picnic. That's two pork puts and two racks of spareribs. It tasted like freedom.

. . . some of the nation's best Division I lacrosse players headed to Vail to play in the Men's Elite Division of one of the country's most prestigious summer tournaments: The Vail Lacrosse Shootout, the 41st iteration of the event. All Out, competing in the event for the first time, beat pre-tournament favorite Lacrossewear 16-15 in double overtime in the Men's Elite Division final. From Lacrosse Magazine:

Syracuse attackman Billy Ward scored the game-winner 20 seconds into the sudden-death, second overtime after the teams each scored once in a mandatory full four-minute extra period. Ward also scored in the first OT, and Georgetown's Riley O'Connor forced the second OT period on a goal with 1.3 seconds left for Lacrossewear, a team comprised entirely of current or past Division I men's players.

The game in total featured 38 current Division I players and was played at a crisp pace with Vail's traditional 30-second shot clock and 2-point arc on a beautiful summer afternoon in the Rocky Mountains east of Denver.

[Notre Dame's Nick] Ossello played a big role in the decision. The Wheat Ridge, Colo. native won 14 of 20 faceoffs against prolific Bryant specialist Kevin Massa, who set NCAA Division I records for faceoffs won and taken this spring. Ossello won seven draws covering the fourth quarter and overtime, including the opening draw of the second overtime. Ossello also tied the game at 12 with 11:05 left in the fourth quarter on a momentum-swinging two-point shot off a faceoff win.

That was the first tie of the game since the opening whistle. All Out took its first lead with less than three minutes left in the fourth quarter on the second of two straight goals from Hofstra's Torin Varn. St. John's attackman Kieran McArdle, who finished second this spring in points per game at the D-I level, tied the game with 44.1 left in regulation. Lacrossewear goalie [Austin] Kaut [of Penn State] then made one of several spectacular saves he made on the day to help force overtime.

[Virginia's Rhody] Heller made several big stops down the stretch for All Out, including three in a 40-second stretch of the first overtime. It was fitting since he was the one that planted the idea of a Colorado-flavored elite team to begin with. Heller finished with 12 saves in two halves of play.

Radical. But which players were the elite of the elite? Here's how the all-tournament team shook out (including only players that will play at the Division I level next season):

There are a lot of big names on that list returning to the show next season. Studs are studs are studs, and some of Division I's best played like animals against solid competition in Colorado. Vail's all-tournament team is often a strong reflection of players ready to do big things in the coming season (just look at last year's honorees), and expectations will continue to surround these players as we all slowly march to the start of the 2014 season.