The Orange and the Tigers square off to renew their rivalry on Saturday. Here's a look into the two teams in a pretty picture.

Do you like the color orange? Do you like the central regions of states? How about national journalists and business people and/or politicians? If you answered two of those three questions with "Yes" -- or you follow lacrosse -- then you'll love this coming weekend as Syracuse and Princeton renew their rivalry. The two teams built a rivalry in the NCAA Tournament and it continues to play out today. Although the rivalry has lost some of its luster since Bill Tierney left the Tigers (and with the two not facing each other in the NCAAs for a while), it's still one of the best games of the season with both teams so evenly matched. The action can be caught on Saturday at 5:00 P.M. (yes, 5:00 you Syracuse fans; don't skip watching the game and blame it on basketball because that doesn't start till 8:49) on ESPNU from Class of '52 Campground Princeton Stadium (this game gets the big-boy-house treatment, melting faces where Princeton football plies its trade). So, sorry, everybody -- no s'mores in the woods on the sideline this time around. However, if you can find a DVD player at the tailgate, watch Slap Shot and come up with the idea that Princeton graduate Ned Braden stripping in front of the Syracuse Bulldogs was the real origin to the Princeton-Syracuse rivalry. 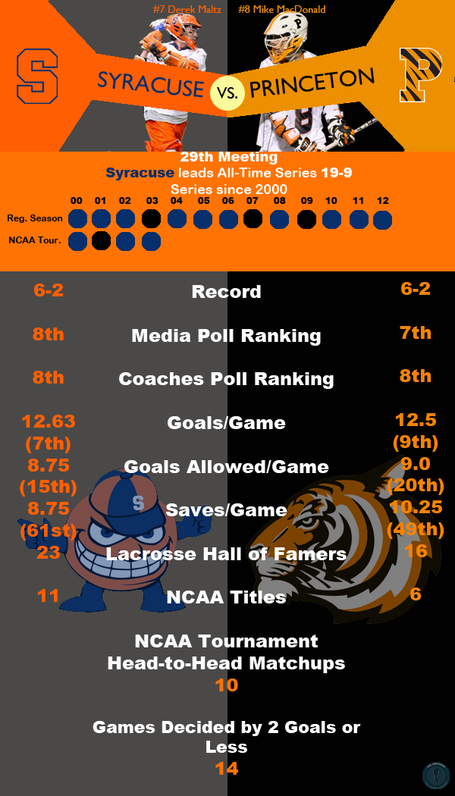 (Click to see the self-trolling of team colors at an even larger scale.)