Just How Important Are Faceoffs?

The overall importance of faceoffs has been a debate in the lacrosse community as long as as people have been paying close attention to the stats.

Share All sharing options for: Just How Important Are Faceoffs?

The latest missive, penned by Christian Swezey of Inside Lacrosse, cites a few anonymous coaches and a couple pieces of anecdotal evidence, but ultimately doesn't really come to any conclusion.

Overall on Saturday, the team that won the face-off battle won the game 12 times and lost 14. (Two games were split evenly on face-offs).

But are face-offs overrated overall? I want to say no. But I am getting outvoted. Badly.

First and foremost, there are always going to be games that are exceptions to any rule: the randomness of sport is part of what makes us love paying attention. But pointing out exceptions - and certainly without exploring the why in addition to the what - doesn't make the rule (or in this case, it may be more accurate to use the word "tendency") invalid.

The only stat that is ever going to correlate 100% with winning is outscoring the opponent. That may seem obvious, but sometimes when we go too far down the statistical rabbit hole, we lose sight of the big picture.

Since that's what matters most, we need to look at the components of outscoring an opponent. A lot of factors come into play:

Offensive and defensive efficiency go directly hand-in-hand with scoring output. Faceoffs, on the other hand, are just one part of the possession game. It's important to remember that - outside of extreme circumstances - faceoffs can help one team or the other, but are never going to win a game on their own. Taking that into account, one particular quote from a coach really grates:

Unfortunately for Swezey, this coach is being unfair; it's a complete strawman argument. Nobody has ever said faceoffs are the most important thing when it comes to winning and losing. The draw is just one phase of the game that can have an impact on the outcome. Of course, in addition to mocking an argument that nobody made, this coach failed to note that Maryland was way down the ranks in faceoffs at . . . fifth nationally. Not to mention the Terps are just a little ahead of 5-2 Denver in shooting percentage . . and not so far ahead of the Hopkins team that he implies is not in the Terps' league.

So, thanks to the TempoFreeLax.com database, we can look at stats from every team, and determine whether faceoffs come into play when it comes to how good a team is overall (i.e. winning and losing). 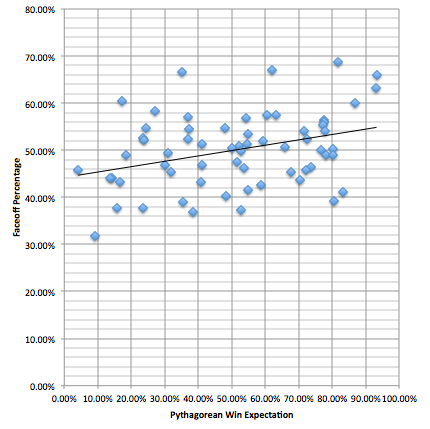 As the chart shows, there's a clear positive correlation there (the relationship isn't that strong, with the R-squared value at just 0.11). The data turns out as we would expect: There is a positive relationship between winning faceoffs and winning lacrosse games. That still doesn't mean faceoffs are the be-all and end-all of winning games, just one thing to keep in mind.

There will be bad teams that can do nothing well except win faceoffs. The VMI teams with Stephen Robarge from 2010-12, for example, were among the country's best faceoff teams. The Keydets occupied the top-five nationally in faceoff win percentage all three years, but the bottom eight (woo! high-water mark in 2011!) in overall team quality.

That's why it's always important to put data in context: Faceoffs are one part of winning games, not the whole thing. That they were bad despite the faceoff percentage indicates that they were really bad at just about everything else. It doesn't indicate that faceoffs have no impact on winning.

Had the Keydets been a 50 percent faceoff team in Robarge's years as opposed to 66%, they would have been far worse overall. That doesn't mean the faceoffs weren't helping the team get better.

There are obviously situations where a single faceoff can determine winning or losing a game. The 2010 national title game between Duke and Notre Dame is as clear as an example can get:

More often than not though, it's the accumulation of possession over the course of a game that is relevant. Faceoffs are one factor in that, but so is the ride/clear game (as the data is represented by TempoFreeLax.com).

VMI shows that there are situations where, not matter how good a team is on faceoffs, the rest of the units are so bad that they can't find a lot of success. Brown's current team shows that the opposite is also true: The Bears are terrible on faceoffs (39.13 percent, 57th nationally), but pretty good overall (sixth nationally to TempoFreeLax.com).

However, the full body of the data placed into proper context shows that they are the exceptions, not the rule. Are faceoffs important? Certainly. Are they the most important factor in winning lacrosse games? Most of the time, no.

Tim Sullivan is the proprietor of GreatLaxState.com and TempoFreeLax.com, and a contributor to College Crosse.