These things are going to be very useful.

From the voice of Syracuse lacrosse, Brian Higgins: 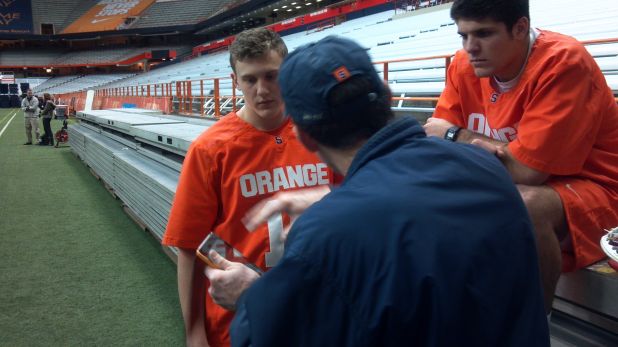 "So, you see, we take all that video and can send it to your iPads and you can watch the tape."

"But do all the players look like angry birds?"

"No, they look like lacrosse players. Your iPad is for watching tape and plays. John Greeley won't look like an angry bird."

"But what if it was an angry bird with a knee brace?"

"No, you're not understanding. The iPad is to look at plays, not to play with."

"No, we didn't load Temple Run on these as a way to show you how to alley dodge."

"I know that Syracuse is on the cutting edge and everything, but if we're going to use iPads to make plays happen from robot lacrosse players that don't have emotions and eat human opponents, I don't see why I need to keep showing up for lift in the morning."

"It's for coaching purposes. Are you even listening?"

"No, you're not paying attention."

"Yes, I am paying attention. I look at these plays, I press some buttons, robot lacrosse players incinerate our enemies, and then I use the Twitter app to let the coaches know what happened (and also to take a picture of me using my iPad to control the robot lacrosse players while they use their lacrosse sticks as spears and ram them through the eyes of our opponents)."

"I really wish this iPad had a concussion app. Are you feeling okay?"

"Never felt better coach. This is going to be the best season ever."