Duke and Cornell are facing off in the national semifinals. SAY, DOESN'T THAT SOUND FAMILIAR?

The Cornell Big Red and the Duke Blue Devils will take on each other for a spot in the national championship game. It's sure to be an exciting game with all the offensive firepower both teams possess. Today, however, we won't be looking ahead to the very near future, but rather we'll be taking a trip to the not so distant past.

In 2007, the Cornell and Duke locked horns to determine which team would advance to Memorial Monday. What started off slowly ended up becoming one of the craziest finishes of a lacrosse game that I remember and arguably one of the most exciting national semifinal games ever played. After trailing for most of the game, the Big Red tied the game with only 17 seconds left in regulation. Everyone was prepared for a gripping overtime. Cornell had taken over the momentum of the game with four unanswered goals and Duke had not scored in over 11 minutes.

Then, with just three seconds left, Zack Greer scored for Duke to put the Devils up 12-11. Cornell's hopes and dreams of a national championship were shattered. The Red's undefeated season was no more. And the Blue Devils, who were just a year removed from having their season cut short due to the scandal that hit the program, were on their way to facing Johns Hopkins to try and win their first national championship under then first year head coach John Danowski. (SPOILER ALERT: They had to wait another three years to pull that off.)

Now, with both teams facing off again against each other in the national semifinals, the memories of 2007 are sure to linger. Cornell would suffer through another Final Four heartbreak two years later, and with Syracuse on the other side of the bracket, the Big Red are looking to exorcise two demons in one weekend and win their first title since 1977. On the other hand, the Blue Devils would like nothing more than a repeat of what happened Memorial Day Weekend six years ago.

Here's a graphical flashback to the epic battle between Cornell and Duke the last time they met on Semifinals Saturday: 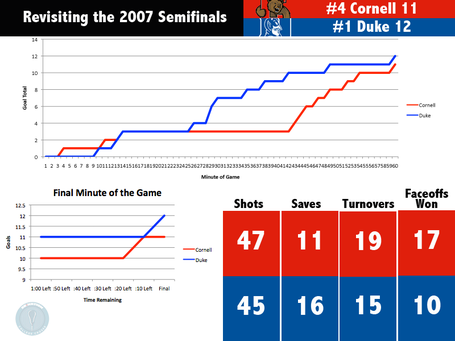 (Click to make it HAM-ier than the HAM-ish nature of the game.)