THE FACEOFF is getting you prepped up for the Final Four the only way it knows how: with pretty pictures and colors.

Memorial Day Weekend has arrived, and that means it's Final Four time. Many of you will be making the pilgrimage to Philadelphia for the weekend; others will prepare their couch for a weekend of action on television. Either way you choose, THE FACEOFF is here to get you all ready for college lacrosse's biggest event.

As it's Championship Weekend, and if you're making the trip down to Philly you're probably staying the whole weekend, we're stepping out of our comfort zone and also giving you the lowdown on the other lacrosse championships going on this weekend. As usual, we're giving you some historic knowledge, stats, and figures for the Division I tournament to see who has the edge in the matchups and who's better at what for you prediction junkies. We've even throwing in some fun facts for you to share with all your buddies that only watch lacrosse this weekend and this weekend only. (Maybe THIS is the year they're convinced that lacrosse is the best, pushing them to actually watch regular season action the next time around.)

So, to avoid getting called for a stall and having just thirty seconds to explain anything further, here's a look at the Championship Weekend edition of THE FACEOFF. 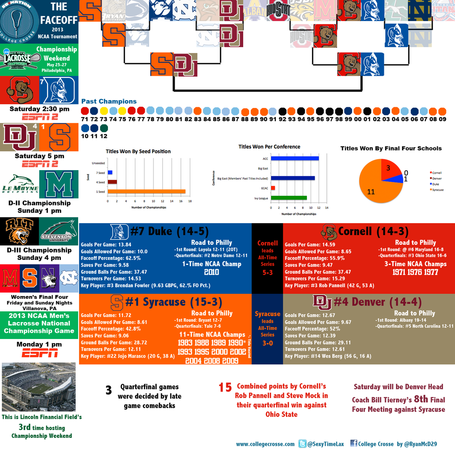 (Click to make it bigger than the action that will be going on this weekend.)

As always, keep it here at College Crosse. We'll have all things Final Four, including user interaction, discussion, and other fun stuff! Don't worry: this won't be the end of THE FACEOFF for this year -- a Tewaaraton Award preview is in the works to put a nice, big, fancy bow on this season. Until then, enjoy your Memorial Day Weekend and the gift of championship lacrosse these next few days!