Share All sharing options for: Buzz Williams + Lacrosse = The Humanity!

Marquette is preparing for its inaugural season in Division I lacrosse in 2013. This is exciting for Wisconsonites -- Wisconsoners? Wiskies? -- mostly because it's an interesting thing happening locally that doesn't involve a butter sculpture or a demonstration involving using cheese as an alternative fuel source in a Chevy Aveo. So, that's something.

Buzz Williams is ready for Marquette Lacrosse. Who else is? (from Spring Lacrosse 101 Clinic) @muathletics instagr.am/p/Nd0ZSkgZb2/

In case you didn't click that link in the tweet, here's the image of Williams threatening a portion of Milwaukee with a lacrosse stick and ball: 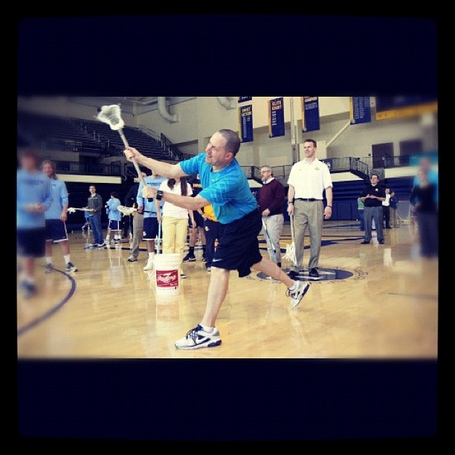 Some brief thoughts about Williams' effort: