The NCAA released the 2012 Division I Men's Lacrosse Championship bracket tonight and Loyola climbed the highest on the Aggro Crag, claiming the overall one-seed. Johns Hopkins, Duke, Notre Dame, Virginia, Massachusetts, Lehigh, and North Carolina all fell in behind the Greyhounds as seeded teams and will get incredibly lucrative, billionty-dollar home games this weekend.

The biggest story from the evening, however, were the decisions made at-large pool. Coming into the night, it looked like there were about five invitations available to around eight relatively qualified candidates. In the end, three of those schools -- Cornell, Fairfield, and Penn State -- weren't invited to the party, instead locking themselves in their rooms to listen to Illimanjaro's "Not Invited" on repeat while cursing the NCAA for not being the boss of them.

I've said it before and I'll say it again: The last 60 days of college lacrosse have been a yellow zoot suit at a high society black tie affair. I haven't seen anything quite like it -- it was basically a bear chomping on a cigar while playing an accordion and then snapping at tourists that don't put a dollar in his case for his free tunes -- and with conference tournaments going full-bonkers, not only picking the NCAA Tournament field but trying to then seed it must have been the hardest job not named "Time traveling salt water taffy door-to-door salesman."

In short, good teams were going to be left out of this thing; it's just the nature of the beast.

Here's a bracket that you can use to challenge your friends to feats of lacrosse intelligence. Just click the image, save, and presto! -- you're officially a lacrosse bracketing expert: 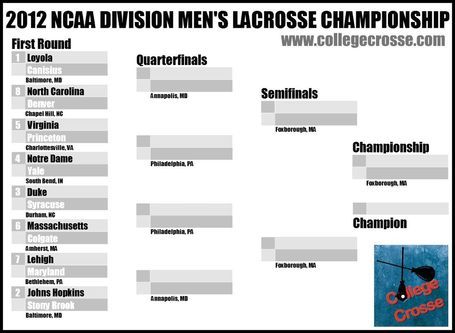 Some brief thoughts about the bracket and my predictions follow after the jump.

I'll have longer thoughts about the inclusions and exclusions later this week, but for now:

What do you knuckleheads think about this whole shebang?