About a month ago, I floated two genius equipment innovation ideas. College Crosse Industries, Ltd. hasn't sold too many of the products since the release -- zero, to be exact -- but that's probably because the equipment is so far ahead of the curve that the commoner doesn't quite understand how innovative the products are.

(That's at least what my mother tells me. Yes, I do want a popsicle to feel better. Thanks, Mom!)

Just in case those two ideas don't make me a billionaire (allowing me to purchase a private island where I can box kangaroos in peace and quiet), I have two more sure-fire, rock-solid equipment innovations that will definitely take the market by storm. If you try and steal these incredibly innovative equipment ideas, you'll be hearing from my attorney -- Me, Hoya Suxa, Esq.

There's been a lot of talk these days about the shooting struggles of many teams. That's not a good thing, especially when a major part of lacrosse is throwing the ball past a goalie. (I guess you could hope that the opposition accidentally drops the bean into their own goal, but that's probably not something that you want to rely on as an offensive philosophy.) In fact, only 26 teams are shooting at or above 30 percent on the year. Luckily, I'm here to solve this problem.

I am proud to present the College Crosse Sniper. This isn't your run-of-the-mill stick and head with deep sidewalls. No, sir. This patent-pending technology would be what the Navy SEALS would use if they had a lacrosse team. (Then again, maybe they do have a lacrosse team and we just don't see them! Very clever, United States government. Very clever.) The College Crosse Sniper is the future of the game, if the future was set in a dystopian society of fervent goalie embarrassment:

Deadly from at least a country mile; sniper scope is detachable for easy on-the-go rope-ripping; it looks pretty bad ass, no?; sniper scope comes in black for covert goal-scoring sorties; infrared, laser-guided scope is perfect for evening games on poorly lit fields or on the shores of Grenada should a lacrosse stick be necessary for a nighttime invasion designed to stabilize the government; again, bad ass, right?

CONS
There is a potential operator error in the design: How do you throw the ball while looking through the scope?; definitely isn't legal; sniping will like result in a defenseman taking an attackman's head off while gauging the range to the target; the technology has only been tested with results of "Target: Expired" and College Crosse warns of potentially unnecessary goalie fatalities.

Another genius example after the jump.

The biggest issue plaguing college lacrosse these days is the pace of play. I mean, who wants to watch an 8-6 game where the teams just cradle behind the cage until they take a shot with a stick that isn't a College Crosse Sniper? Nobody that hasn't sustained critical injuries due to the College Crosse Sniper, that's who.

Luckily, I'm here to solve this problem. I am proud to present the College Crosse JetPack 4000T. (The "T" stands for "Too Freakin' Cool!") We're about to turn "The Fastest Game on Two Feet!" into "The Fastest Game with Two Potentially Unstable Propulsion Packs!": 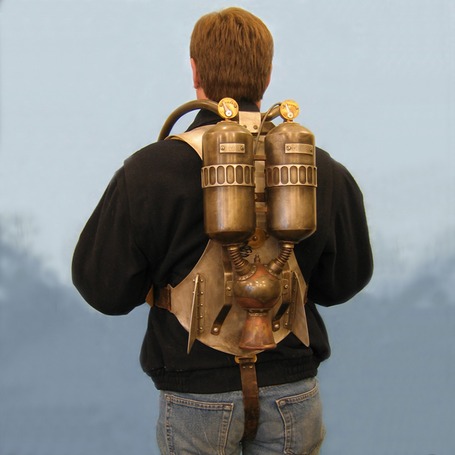 PROS
The technology is from the future, which automatically makes it beyond awesome; clearing the ball becomes a cinch, what with the ability to simply fly over the ride and shout, "Later, suckers!"; no more worrying about how athletic departments are going to pay for expensive gasoline on their bus trips (DIY travel, baby!); doubles as protective gear, keeping kidneys in their natural "not whacked by a crosse causing internal bleeding" state; dodging just became a whole lot more yaw-ier.

CONS
There's no instruction manual for this thing, just a piece of paper that says, "Good luck and please don't die."; man was not intended to fly, nevermind fly while trying to throw a ball past a keeper with a College Crosse Sniper; there have been a few issues with small explosions in early testing, but nothing that a burn unit couldn't handle; probably isn't legal; probably requiresFAA clearance to use these in a lacrosse game, and those guys are stingy with licenses (stupid bureaucrats).

Pretty good, right? What do you guys have in the innovation department? The comments, they are yours.