Share All sharing options for: Kevin Crowley is Lacrosse Combustion

Do you need to score a goal?  Kevin Crowley can do that.

Do you need a guy to carry, dodge, and dish?  Crowley has you covered.

Do you need a guy to go clandestine and relieve your neighbor's dog of its living privileges?  Crowley can handle that, too.  He probably won't follow through, though, because dogs are adorable creatures and getting blood and doggy hair out of your killing crosse is a real pain in the ass.

This guy is pure combustion, son.  You can try to control him, but at some point he's going to explode.  It's just the nature of the beast: When the elements dictate, his reaction is blazing heat.

Despite Crowley's potential for turbulence, however, his Stony Brook team is staring down the potential of not making the NCAA Tournament if the Seawolves fail to capture the America East crown.  The team's record is solid (9-3), but the other metrics used in at-large selection aren't really favoring Stony Brook at this moment.

That's a sad, sad state of affairs.  As it stands currently, the Seawolves are fourth-nationally in adjusted offensive efficiency, first in the country in offensive effective shooting percentage, and fifth in offensive assist rate.  This is a rocket show offense -- an addiction that I love more than Sour Patch Kids sandwiches -- and if the Seawolves don't make the show of all shows, I'm going to be sadder than I would be if Crowley killed my beagle with his lacrosse stick.

Let's get into the Stony Brook offense and "Combustion's" impact on it.  If you're new to this, a good place to start is this piece that I wrote on Scott Perri and his contributions to the Drexel offense.  It lays out the questions that I'm looking to answer.

Plus, you know, free page views for me and such.

We start, as always, with a romp through Stony Brook's double-digit point scorers.  In the last column is "Total Offensive Value," which is merely a completely inappropriate way to say "individual points per 100 offensive possessions":

No doink, right?  Crowley is spark plug-meeting-gasoline important to the Stony Brook combustion cycle.  He ranks fifth-nationally in "Total Offensive Value" and is 10th in the country in individual assist rate (assists per 100 offensive possessions).   What makes this Seawolves team a little more interesting than Scott Perri's Drexel team and as exciting as Rob Pannell's Cornell team is that Stony Brook has four guys in the top-125 in individual "Total Offensive Value."

KABOOM!  That's a nice handful of guys getting it done on the offensive end.  Multi-faceted: It's just not for investment portfolios anymore.

When you move on to the scoring distribution table you can really see how functionally destructive this Seawolves offense is.   While led by Crowley, the team's top-seven guys are handling business in a host of different ways:

Note: There are more combination tandems than those listed.  I simply stopped at four because I was sick of populating the table.  If you want the full boat of tandems, leave a comment and I'll fill you in.

Check out Crowley's production: 11 tallies all by himself, he's assisted on 22 more, and got help on 15 others. His value is nuts.  Also, there's an important combination trend here: While Jordan McBride has gotten on the board twice this season with an unassisted goal, he is really relying on Crowley to get him the bean in a scoring position -- a full 42% of his goals this season have first started in Combustion's crosse.

Jordan McBride is good (in fact, he's the America East Player of the Year), but Crowley (and to a lesser degree, the rest of the Seawolves big offensive sticks) makes him truly dangerous.  Here's some other quick points: 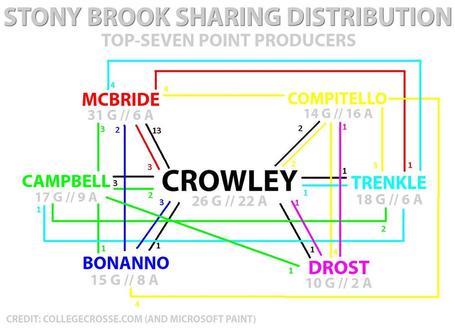