The Maryland Offense: Diversity in Scoring

Share All sharing options for: The Maryland Offense: Diversity in Scoring

When I've written about offensive units in the past, the discussion has pretty much involved describing a central hub that is surrounded by a small handful of other individual contributors.  For example:

Maryland's offense is a different kind of cat, man. The Terrapins are rolling with some high profile guns that get lots of ink -- Ryan Young, Grant Catalino, Owen Blye, Joe Cummings -- but Maryland doesn't rely on them exclusively to generate an efficient offense.   Rather, the Terrapins really distribute the load among nine or 10 guys to efficiently score.

Here's a quick chart illustrating Maryland's five players that have generated at least 20 points on the season:

Having gone through the above-linked analyses, I had a hunch that these five guys were really working with each other and individually to generate Maryland's assist-heavy offense.  It turns out that my assumption was kind of off-base: A lot of the Terrapins' offense involves these five guys, but almost 40% of their individual point generation is attributable to working with other players.

Now that is multiplicity.

Here's a chart that illustrates Maryland's scoring distribution on the year in the context of the above-referenced five players.  It's pretty easy to understand.  For example, Blye and Young have hooked up for a score five times this season (Young has provided Blye with three assists; Blye has provided Young with two).  As you can see, scoring contributions come from across the board and aren't centralized within Maryland's biggest point generators:

Here's the sharing chart for the top-five point producers.  It shows assists-in and assists-out: 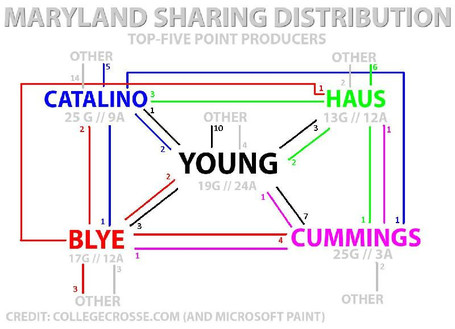