College Crosse NCAA Analyst John Carrozza gave his thoughts on his alma mater and how they played Sunday night.  Take a read through...

Game 3 of the Big City Classic featured two very talented teams. Duke is a team that struggled early in the season, but has been able harmonize over the past few weeks and has shown glimpse’s of a playoff caliber team. Duke’s opponent on Sunday was the traditionally rich and inherently talented Syracuse Orange.  The Syracuse Men’s lacrosse team had uncharacteristic offensive output in two games prior to the Big City Classic.  The Orange posted five goals in consecutive games and although they came out victorious in both games, people began to think that the lacrosse giant could be tamed.  That’s almost as naïve as believing in the Easter Bunny.  With a team as talented as the Orange, it was only a matter of time until the unanimous #1 team would take matters into their own hands.

Right out of the gates the Syracuse machine was working, and working at a high level. Just when Duke thought that they had turned away potential scoring threats, Cuse used its offensive prowess to move the ball and find the open man. The Orange scored 6 goals in the first period and led 9-2 at the half.  Nine different players scored 13 goals for Syracuse, which is an impressive statistic.  What’s more impressive is the fact that nine of the 13 goals were assisted.  "Ob-la-di, Ob-la-da, life goes on…. Brah! Lala how life goes on... Ob-la-di, Ob-la-da, life goes on…. Brah! Lala how life goes on…" The Beatles song embodied how all of the Cuse fans felt with their teams return to "normalcy."  I have to say, I was impressed with the level of play by my alma mater and am proud to say that it was a good day to be an Orange.

The play of goaltender John Galloway was superb yet again; posting a season high 16 saves.  Galloway has developed into a premier goalie during his tenure at SU and has the hardware to prove his worth.  Time and time again he shows poise in the cage and has the presence of mind to make plays out of the cage.  Alongside Galloway’s stellar performance, Jovan Miller has materialized into what I believe is the next generation of prototype midfielders.  He possesses all of the attributes necessary to play both ends of the field, which will only help him as he moves on to the pro game. 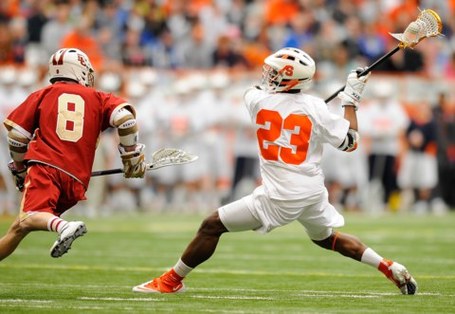 Posting a career high four points (2 goals, 2 assists), Jovan will build off of his performance and continue to give opposing defenses headaches.

For Duke, there were some bright spots throughout the contest.  They dominated the X, going 20 of 27 and those extra possessions gave Duke an opportunity to make a run at the Orange in the second half.  Naturally, going into halftime down seven goals would prove to be too much of a deficit to overcome.  For the Blue Devils, a lesson has to be taken from this game.  Hopefully they can learn from this game and learn to play four  quarters of quality lacrosse.

I’ll leave you with a quote about the spring, more specifically, April:

"April hath put a spirit of youth in everything."