Rather than meander through another tempo-free profile, let's do something different.  Justin basically posed the following question yesterday: If you're Johns Hopkins, which Tarheel do you target as a "must-stop"?  Let's go ahead and try to answer it.

Now, North Carolina has one of the most efficient offenses in the country (the Tarheels are ranked 10th nationally at 33.15 goals per 100 possessions).  It is my contention that Nicky Galasso is the hub from which all the nasty North Carolina spokes emanate.

Well, I sat down and figured it out.  Ready?  Set?  PICTOGRAPH! 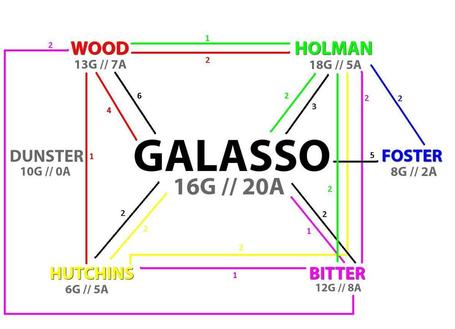 Here's how to read this priceless work of Microsoft Paint art:

It's pretty clear: Galasso is the juice in the machine. Whether he's allowed to flourish because Bitter demands extra attention is debatable (and, arguably, missing the point). Galasso gets everyone going, Bitter included (although Bitter has done a great job sharing the wealth as well).  Here are the goal-assist relationships:

Galasso has his fingerprints on everything.  Conversely, Dunster is quite happy to score all by himself, thank you very much.  He hasn't registered an assist yet this year.  What's even more fun is that nobody from this group has assisted him yet this year either.  That's working on an island, and he's performing.

So, if I want to slow a bunch of the Carolina offense down, I start with giving Galasso a hell of a time.  I'd then move on to Bitter and hope to hell that Thomas Wood doesn't play (although Foster has filled in admirably).

I think this chart my clear up any confusion.  It's an aggregation of the above. Among the seven players noted, who has helped and been helped the most:

I totally borrowed this idea from Luke Winn over at S.I.  If you like hoops, you should read his stuff.  He's super smart.